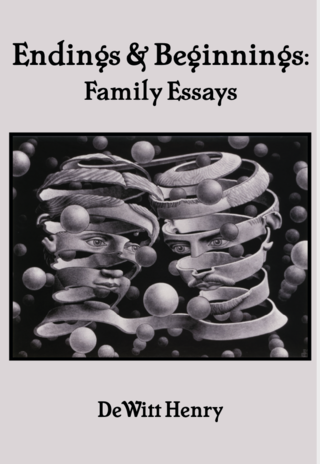 Endings & Beginnings: Family Essays (MadHat Press, 2021) completes a trilogy-in-memoir with Sweet Dreams and Safe Suicide.  "The present collection [is] the most powerful book of the three"-- Introduction by John Skoyles.  Available from https://madhat-press.com/products/endings-beginnings-by-dewitt-henry and on Amazon (https://www.amazon.com/Endings-Beginnings-Family-DeWitt-Henry/dp/1952335167/).

The Marriage of Anna Maye Potts

Winner of the 2000 Peter Taylor Prize for the Novel 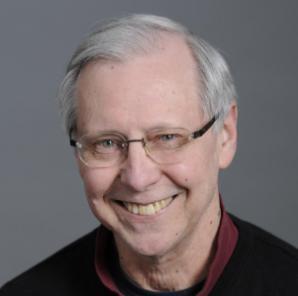 My Writing, Editing and Publishing Life

VISIONS OF A WAYNE CHILDHOOD, CreateSpace, 2012

Novel:THE MARRIAGE OF ANNA MAYE POTTS, University of Tennesee Press, 2001 (winner of the Peter Taylor Prize for the Novel)

BREAKING INTO PRINT: EARLY STORIES AND INSIGHTS INTO GETTING PUBLISHED; A PLOUGHSHARES ANTHOLOGY, Beacon Press, 2000

OTHER SIDES OF SILENCE: NEW FICTION FROM PLOUGHSHARES, Faber and Faber, 1993, o.p.

Fiction, Essays, Poems and Personal Narratives in periodicals and anthologies:

"Father of the Bride," essay, Solstice: A Magazine of Diverse Voices, Winter 2020.

"On Falling," prose poem, Constellations: A Journal of Poetry and Fiction, Vol 6, Fall 2016.

"A Tribute to 'Tornado at the Club,' from Evan S. Connell's Mrs. Bridge (as revised into the Screenplay, Mr. and Mrs. Bridge, by Ruth Prawer Jhabvala)," fiction, WILDERNESS HOUSE LITERARY REVIEW #5/1, April, 2010. Awarded a Chekhov Prize for Excellence as best fiction of the year.

"Forces of Nature: A Dream Retold," narrative, THE HARVARD REVIEW, 2001

"Memoir of My Father," narrative, THE AMERICAN VOICE, October, 1996 (cited as distinctive in BEST AMERICAN ESSAYS 1997)

"On My Racism: Notes by a WASP," narrative, PLOUGHSHARES, 1990 (cited as distinctive in BEST AMERICAN ESSAYS 1991)

"Witness," narrative, THE PUSHCART PRIZE XIV, 1989(revised and expanded from BOULEVARD below)

Review of THE LIMITS OF THE WORLD by Jennifer Acker, THE WOVEN TALE PRESS, Feb. 14, 2019 (https://www.thewoventalepress.net/book-reviews/).

Review of THE HIDDEN MACHINERY by Margot Livesey, THE WOVEN TALE PRESS, October 5, 2017.

Commentary, AN AFFAIR TO REMEMBER on CELEBRITIES IN DISGRACE (Blog), September 15, 2017 (https://celebritiesindisgrace.wordpress.com/).

Review of IN SUNLIGHT OR IN SHADOW: STORIES INSPIRED BY THE PAINTINGS OF EDWARD HOPPER, ed Lawrence Block (Pegasus, 2016), THE WOVEN TALE PRESS, February 9,2017 (http://www.thewoventalepress.net/2017/02/09/book-review-sunlight-shadow/).

"Reminisces on the 45th Anniversary of Ploughshares Magazine," essay, THE SOMERVILLE TIMES, July 27, 2016

Review of LEAVING THE PINK HOUSE: A MEMOIR by Ladette Randolph (U. of Iowa Press, 2014), SOLSTICE, 10/30/14 (solsticelitmag.org/review-leaving-pink-house-ladette-randolph).

"Foreword" to DISMEMBERING THE AMERICAN DREAM: THE LIFE AND FICITON OF RICHARD YATES by Kate Charlton-Jones (U. of Alabama Press, 2014)

"Confronting the Mountain," a review of Nicholas O'Connell's THE STORMS OF DENALI (U. of Alaska Press, 2013), AMHERST, Spring 2013

Review of THEY'RE CALLING YOU HOME by Doug Crandell, PIF Magazine, June 1, 2012.

Review of WHAT IS LEFT THE DAUGHTER by Howard Norman, Ploughshares, Winter 2011-12

Review of A STRANGER ON THE PLANET by Adam Schwartz, The Boston Globe, February 3, 2011

Review of IN HEAVEN EVERYTHING IS FINE by Josh Frank with Charlie Buckholtz, Harvard Review, No. 37, 2010

Review of WHAT I TALK ABOUT WHEN I TALK ABOUT RUNNING by Haruki Murakami, Ploughshares, Vol. 35, No. 2, Fall 2009

Review of A TRAGIC HONESTY: THE LIFE AND WORK OF RICHARD YATES by Blake Bailey, The Boston Globe, July 13, 2003

"Literary Publishing and the Libraries: Part I," Wilson Library Bulletin, 1980

"On the History of the Literary Magazine," essay/review, AMERICAN BOOK REVIEW, June, 1979

"A Conversation with DeWitt Henry," by Susan Tepper, The Nervous Breakdown, Nov. 10, 2018 (http://thenervousbreakdown.com/stepper/2018/11/a-conversation-with-dewitt-henry-2/ ).

"A Conversation with DeWitt Henry" by Susan Tepper, The Nervous Breakdown, 2/7/2012 (http://www.thenervousbreakdown.com/stepper/2012/02/a-conversation-with-dewitt-henry/)

10K running (at least once a year, especially the James Joyce 10K in Dedham, Mass at the end of each April...well a great race, but a bystander to this now too, tread-milling to compensate)

Honesty in the Use of Words: A Conversation with DeWitt Henry (plus "On Meat").

A Conversation with DeWitt Henry 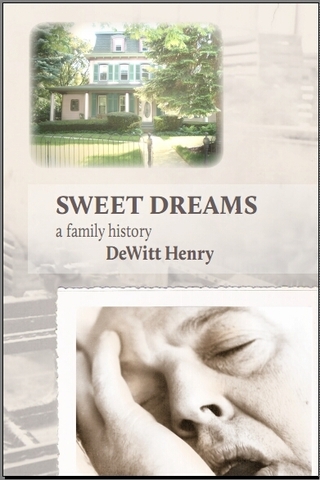 "Endings are for the dying, and even for them, more wishful than certain." --from "Departures" in SWEET DREAMS
Chekhov Prize for Excellence from WHLR 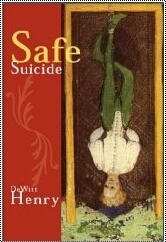 "Life itself is our glory and ordeal, our measure of heart, and of passion. We do our best. There is no finish line." --from "On Aging"
Rand Richards Cooper reviews Safe Suicide for Amherst Magazine
Chuck Leddy reviews Safe Suicide in the Boston Globe
Nina McLaughlin reviews Safe Suicide in the Phoenix
John Domini review of Safe Suicide
Stephen Windwalker review of SAFE SUICIDE: "There is more to gain from Henry’s book than any Paris memoir, whatever the transient pleasures of the latter. Every page of this book beats with felt life."
Jack Smith review of SAFE SUICIDE: "This memoir is like a fine piece of orchestral music, enriched by its different movements and moods." (More reviews under "My Works")
Ploughshares literary magazine
Fooling Around in Prose: An anthology of Postmodern American Fiction
Emerson College Writing, Literature, Publishing Department