A remarkable letter from Rand Richards Cooper about SWEET DREAMS (9/25/2011):

"Finally read your book, which I enjoyed a lot. First of all because the ground is ancestrally familiar to me, Philly and those suburbs, the schools, the era (my dad was a working class kid from Prospect Park who got scholarships to Episcopal and later Swarthmore and Penn Med School, living at home the entire time; my mom a nouveau riche girl from Swarthmore—her father a VP at DuPont)…But I got interested in your book well beyond those points of personal geography. There's so much there. The evocation of boyhood, though mine was almost two decades after yours—intensely familiar, starting with the deep love of the mother (my father, on the other hand, couldn't have been more different from yours, who much more resembled my grandfathers) and the vivid fears and hopes, and the fantastically obsessive projects, of childhood. And that face at the window at night, leering, insane—I saw that too, and fled to my parents' room (I recall it as a sort of Alfred E. Newman face, but older and terrifyingly malevolent)…A younger child's worshipfully detailed observations of the older sibling (yours of Jack)…The white middle-class WASP male outlook of that era, with its hatred of Roosevelt, its mistrust of all forms of otherness, its harshness toward the disadvantaged—and, weirdly, its furious decorum and elevation of fair play, hard work, etc. all amounting to a kind of perverted idealism pieced together out of conventional pieties and various lethal biases….Your perfect evocation of the mixed beauty and boredom of going to church (I used to sit there and try to count how many finials there were along the vast semicircular foot of the dome above the apse) and the thrilling freedom of release following final benediction—oh, and also a child's awareness of bad voices and good mixed mellifluously together in hymn singing (my mother, bed, my father, lovely—he'd had a singing scholarship to Episcopal, in fact)…The hilarious depiction of yourself in your cowboy costume after returning from the summer out west (too bad not photo!), and with it the tenderer implication of just how much hope goes into an adolescent's ludicrous self-recreation of that sort…And, later, at Amherst, a nice encapsulation of the Amherst Attitude—that smart, quick, and quite smug assumption of being so far above (say) mere topicality—seeing through everything, as WHP [William Pritchard] titled one of his books—that one could remain a safe distance of irony from even the most pressing issues of the day (needless to say, that attitude is long gone, and indeed was well on its way to disappearing when I was there, in the college's first stages of coeducation)…Anyway, I've enjoyed living in your book, your life, for the past few days. Thanks and best wishes. RRC."

The Marriage of Anna Maye Potts

Winner of the 2000 Peter Taylor Prize for the Novel 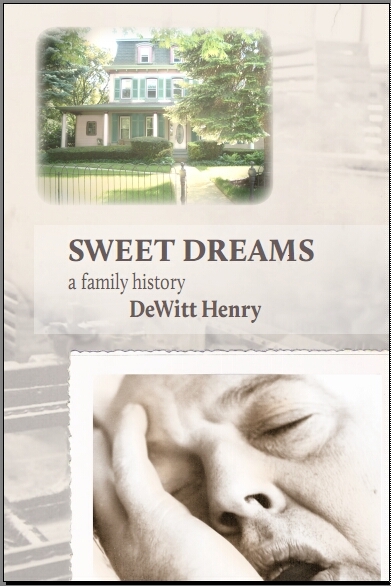 A masterful memoir of a young boy's passage from childhood to adulthood in a family of privilege torn by dark secrets: alcoholism, mental illness, dysfunction. As a complicated coming of age story, Sweet Dreams charts the journey of DeWitt Henry, well-known author, editor, publisher and educator, in his earliest struggles to find and achieve his own creative destiny. It is what Richard Hoffman calls "...a remarkable feat of memory delivered in extraordinary prose."